The Village is holding a series of monthly citizen workshops to plan for future business development on U.S. Highway 1 and on Northlake Boulevard. At the meetings, consultants will present proposed changes to the Village Code of Ordinances that are intended to encourage private sector investment in local business properties. Updates to the Code are a major component of the Citizen’s Master Plan, which the Village Council approved in October 2016.
If the proposed changes are implemented, they will have a significant impact on the look and design of commercial buildings and landscaping in the Village, potentially resulting in new business development, as well as increased shopping, dining and entertainment experiences within North Palm Beach.

Key recommendations of the Master Plan include:
Each meeting will cover different aspects of the proposed Code changes, such as plans for the Twin City Mall site, New zoning rules for the Camelot Inn, the Crystal Cove business complex and the IHOP restaurant. There also will be guided discussions about off-street parking, building height, outdoor seating regulations and businesses on the north side of Northlake Boulevard.

Public involvement is critically important to the redevelopment process and to the future of the Village life and property values, so residents are strongly encouraged to attend and to get involved. Each meeting will begin at 6:30 p.m. in the Village Council Chambers.

Meeting dates are:
For more information about the Code Update meetings, visit www.VillageCodeUpdate.org.

On March 29, the Village held a Code Update Public Kick-Off Event for the creation of a Code Update to implement the Citizen’s Village Master Plan adopted in October 2016 and to introduce the consultant team. As part of the event, Victor Dover, founding principal of Dover Kohl & Partners, gave a “Food for Thought” presentation. The presentation showed how land development codes can lay the groundwork to make places that are more equitable, healthy, economically productive, and more inspiring.

In addition to the Code Update Public Kick-Off Event, there will be a Code Update Workshop on April 6, 2018 at 6 p.m. at the North Palm Beach Country Club.

"I think it's important to remember the Master Plan itself is an aspirational document that reflects the desires and visions of the community, and its loaded with different ideas and different recommendations, and illustrations, and policy recommendations, but I think it'a important for me to put on the record and for everybody to recognize that your support and adoption of this document and this effort does not obligate the Village to implement all of these things as specifically articulated in the plan."

On October 13th, the Village Council discussed the final draft of the Master Plan prepared by the Treasure Coast Regional Planning Council.  The Village Council will vote on adoption of the final version of the Master Plan at its October 27, 2016 Regular Session.  Click here for the document.  Note: the file is large and may take some time to upload.

Attached is a draft of the Village's Master Plan that was prepared by the Treasure Coast Regional Planning Council.  The file is large and may take some time to upload. Click here for the document.   We anticipate a workshop regarding this Master Plan to be scheduled at the end of July or beginning of August. In the meantime, comments are welcomed. The Village would like to thank everyone for their participation in this process.

Thank you to all who attended the Friday evening presentation by the Treasure Coast Regional Planning Council staff Mr. Dana Little,  along with Economist and Real Estate Expert Mr. Tom Lavash to present their findings after the week-long Charrette.  A great turnout of approximately 100 people enjoyed the music from the Conservatory School @ NPB as they entered the cafeteria.  These students are instructed by Band Director Victor Fernandez.  The Village again would like to thank Principal Teresa Stoupas for allowing us the use of the cafeteria to hold the meetings. 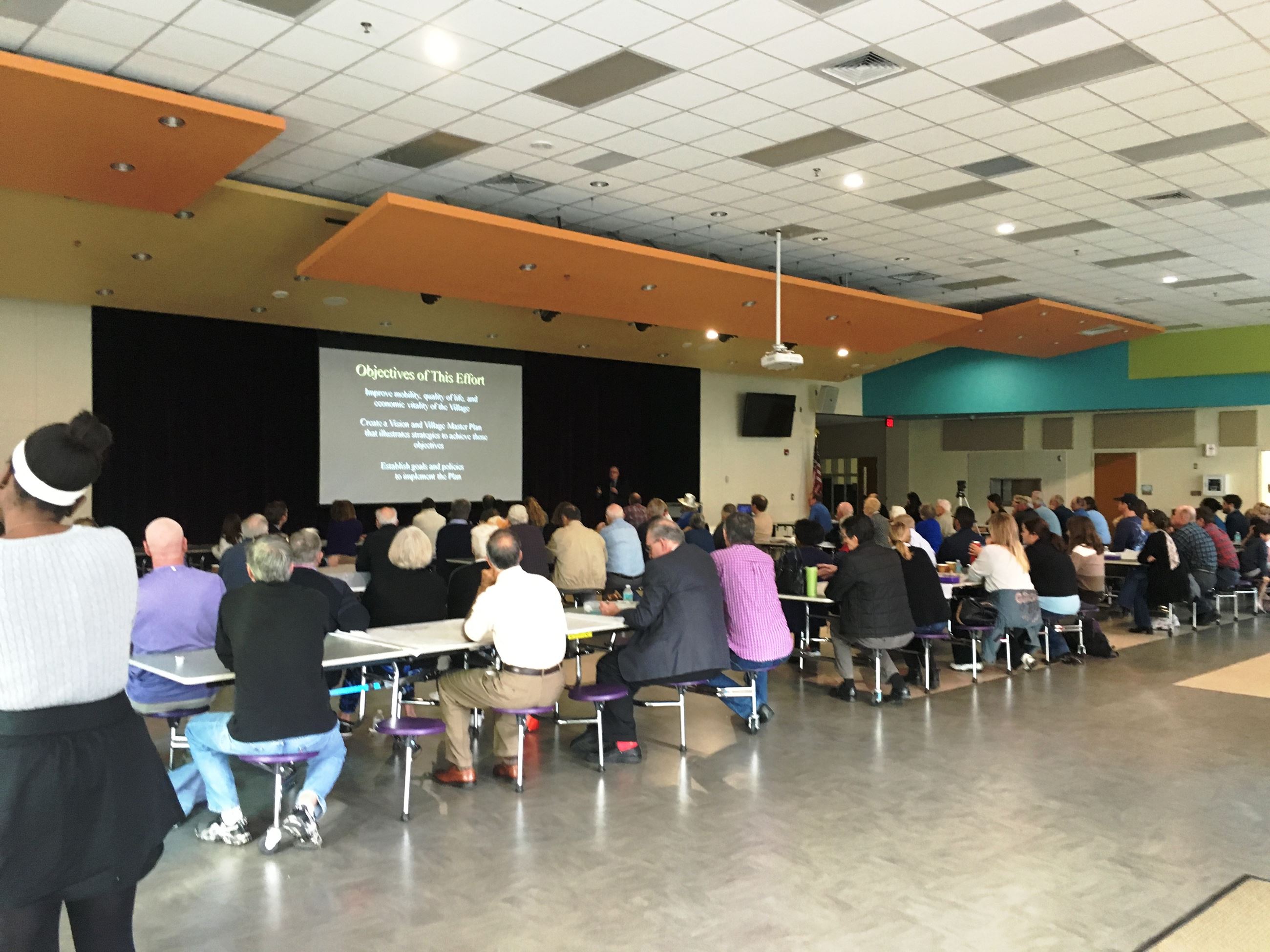 The Village would like to thank everyone that attended and participated in the opening of the Charrette on Saturday, January 30, 2016 at the Conservatory School@NPB.  Special thanks to Principal Teresa Stoupas for accommodating us!   Over 150 people attended with many staying the entire day.  This tells us how much our residents care about the future of our community!  Representatives from the School District, CFO Jeff Atwater, the Host Committee Members, business owners and residents all attended.

After the opening presentation by Dana Little from the Treasure Coast Regional Planning Council, the attendees were broken into smaller groups and later presented their ideas and visions for NPB's future.  If you were unable to attend, click here to see the presentation.

The Charrette continues with a Public Design workshop to be held all week-long from 9 am-9pm in the Council Chambers.  The Maps form Saturday are on display in the chambers for you to review what your friends and neighbors would like to see happen in NPB.

On Friday, February 5, 2016, the TCRPC will present the "Work in Progress" at the Conservatory School @ NPB cafeteria at 6pm to present the findings and input received during the Charrette Process.

We hope you can attend some, if not all of the events occurring this week!  Please call Joanna Cunningham at 561-904-2122 or email her at jcunningham@village-npb.org for more information.

Come hear Retail Expert and Urban Planner Mr. Robert Gibbs give a presentation at the North Palm Beach Country Club on Tuesday, February 2, 2016 at 6:00pm.  He will be discussing "Downtown Retailing and Merchandising for the 21st Century City".  Mr. Gibbs frequently lectures at Harvard University and we are very honored to have him come to the Village of North Palm Beach! 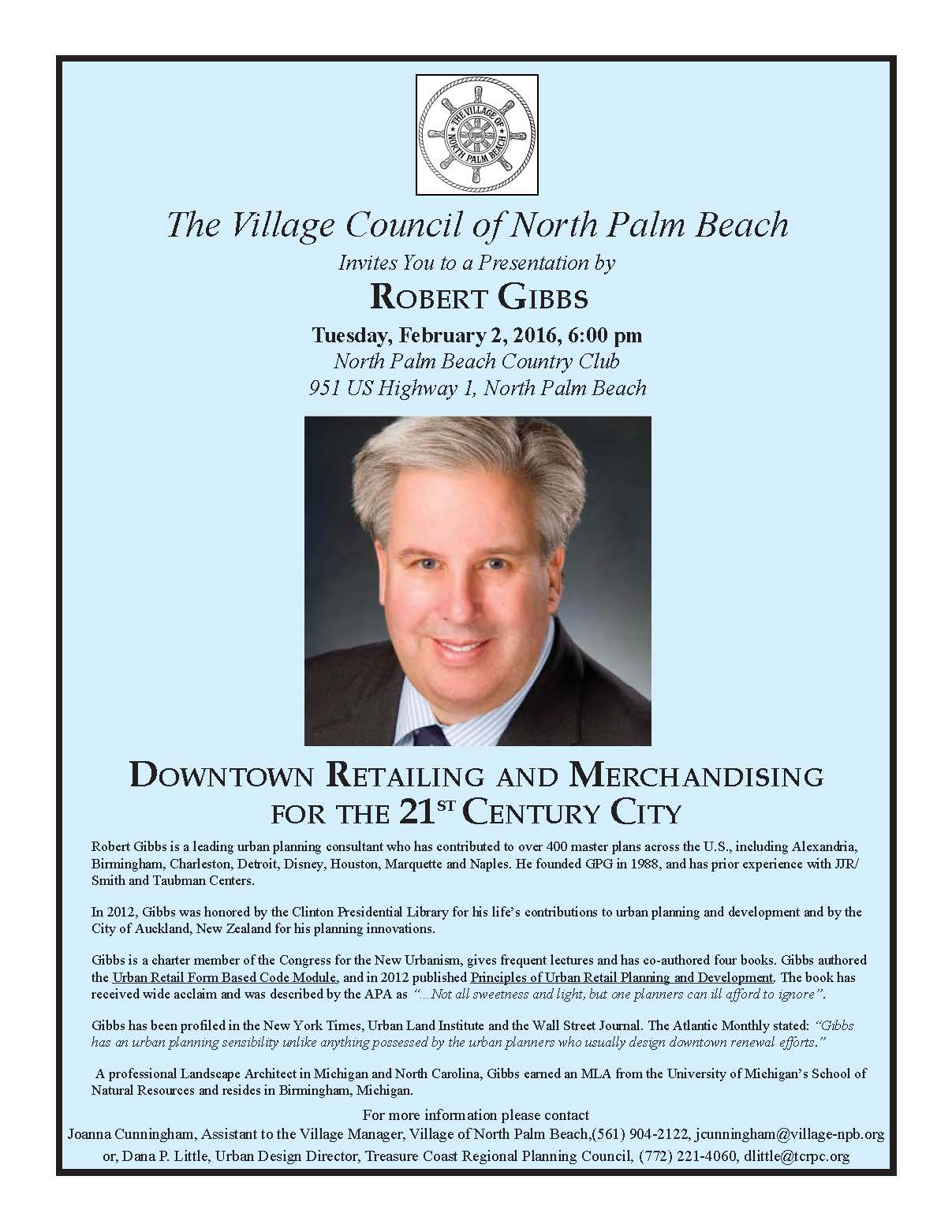 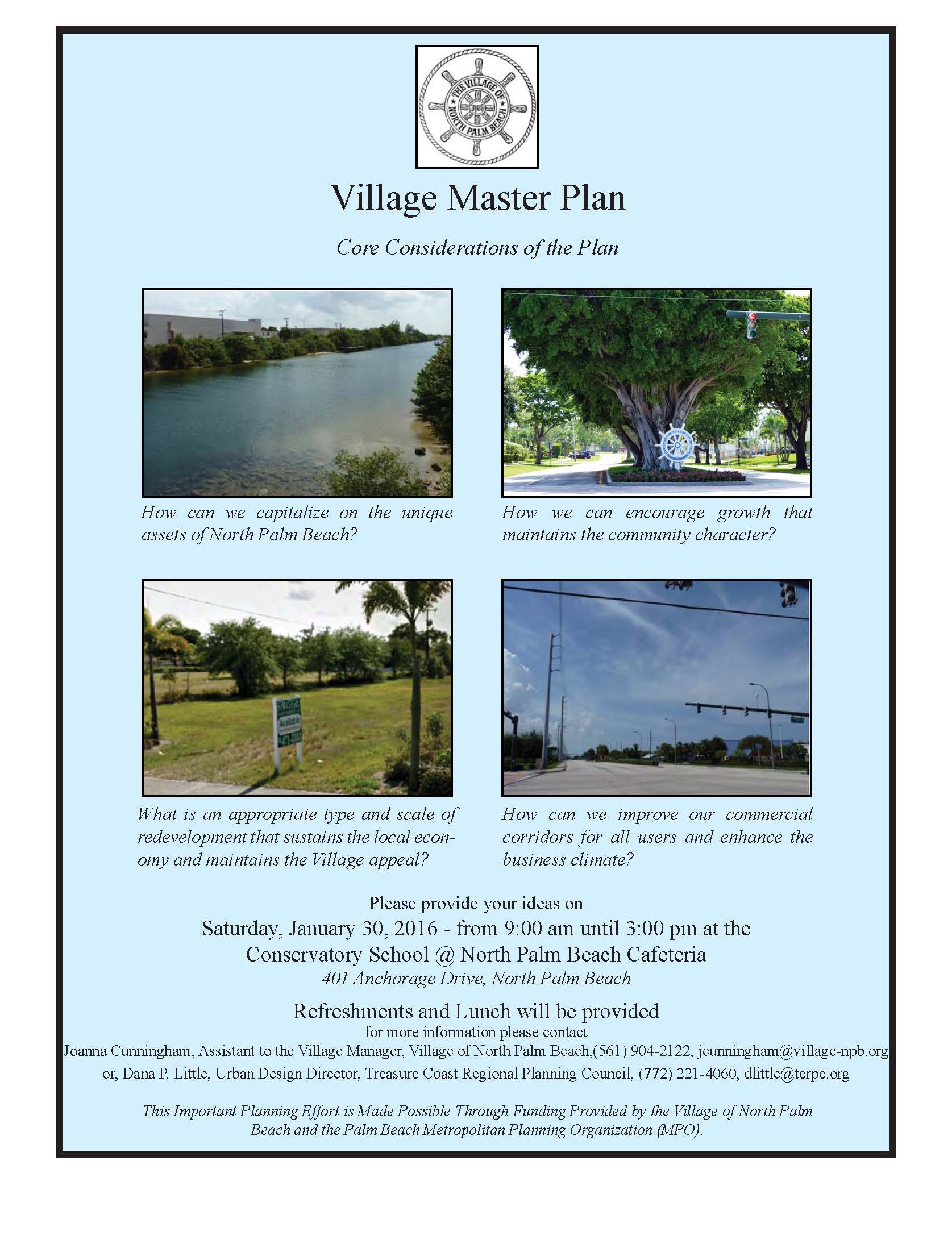 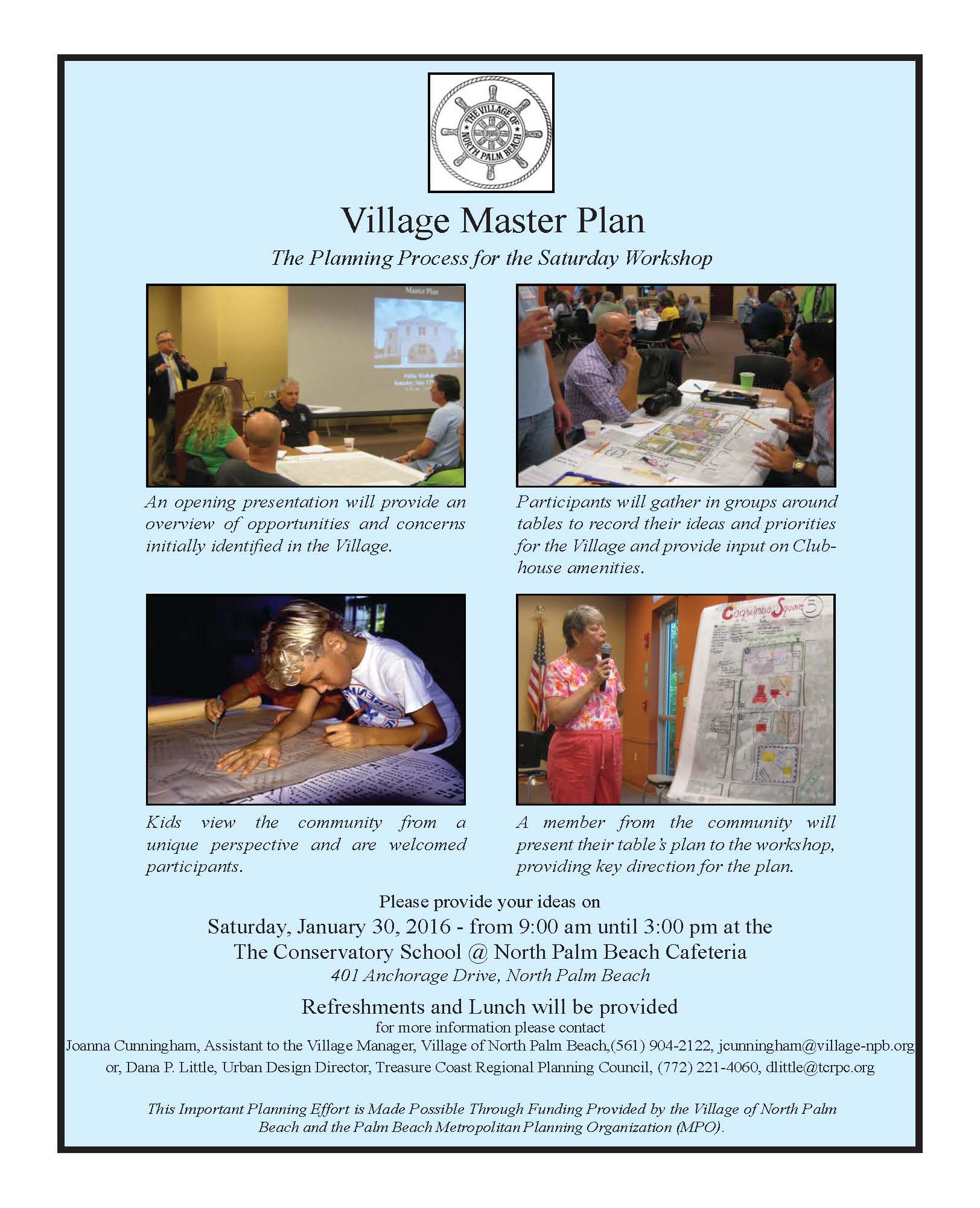 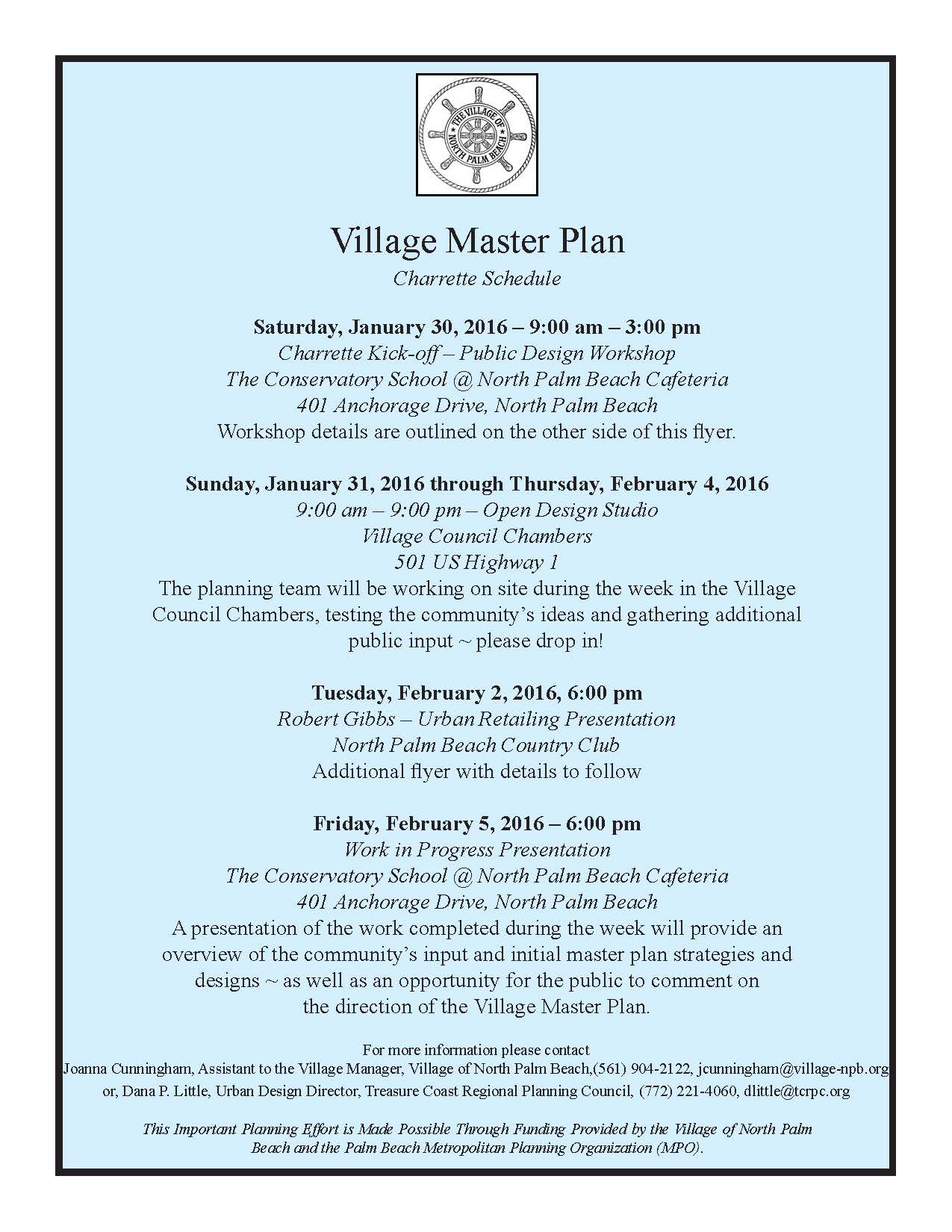 Invitation to attend Public Design Workshop.  Come join us for a day-long Public Design Workshop.  This meeting is the kick-off to the week-long Charrette that will shape the future of the Village of North Palm Beach by having the residents and vested parties create a new Master Plan which includes the building of a new clubhouse at the Country Club.  Please join us! 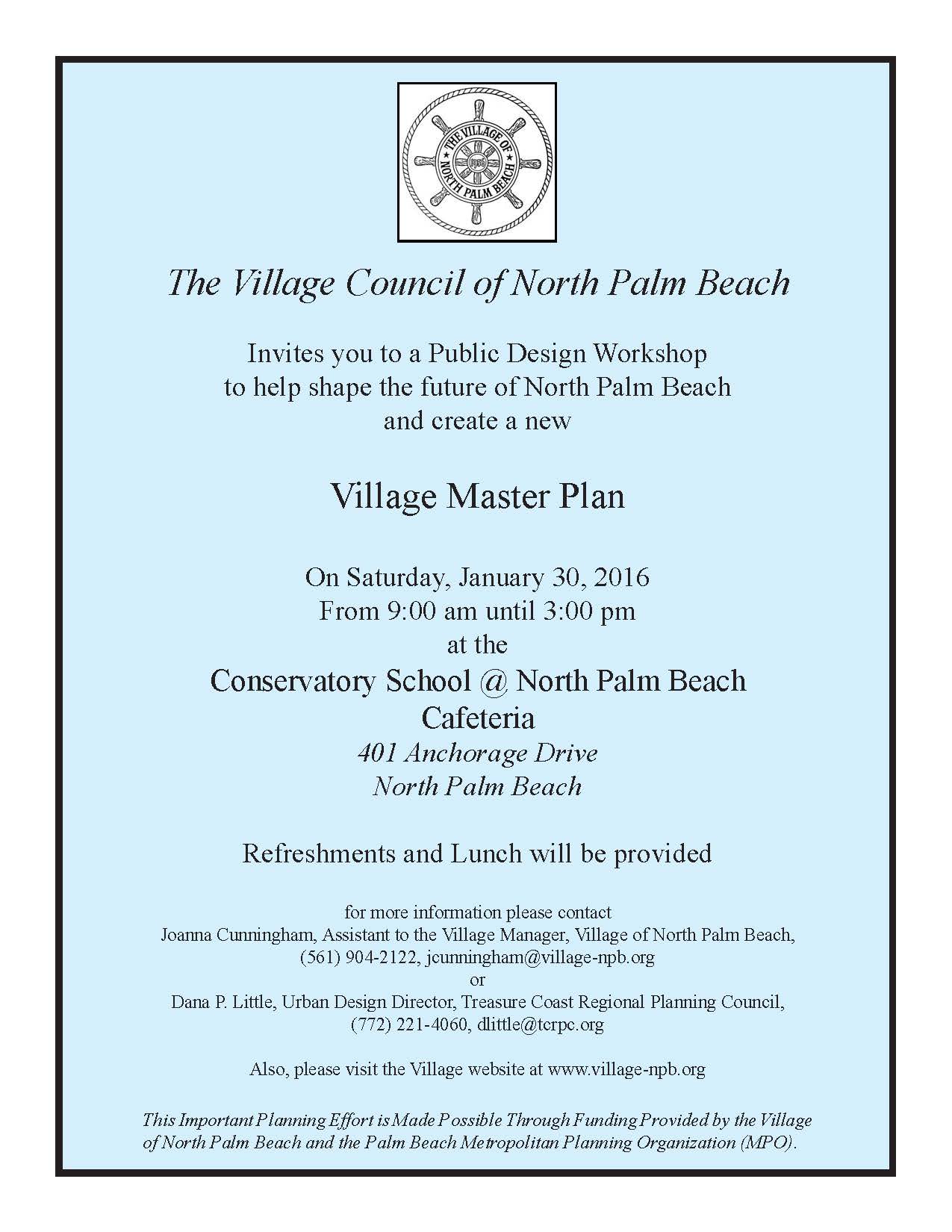 Soon, you will also see banners around the Village regarding this event:

Treasure Coast Regional Planning Council staff will be conducting interviews with the Mayor and Council, business owners and residents in the coming weeks.  This is in preparation for the week-long Charrette that will occur from January 30th through February 5th.

What is a "charrette"?

Charrette means "cart" in French; various architectural school legends hold that at the Ecole des Beaux Arts in 19th Century Paris, students were still sketching as carts carried their boards away to be juried.

Today, the term is used to describe a high speed, intensive creative session in which a team concentrates on specific design problems with citizens and presents solutions..

The Charrette schedule to hear from experts from around the country and provide your thoughts and opinions on the Master Plan and the new Country Club Clubhouse, will be:

Saturday, January 30th from 9am-3pm in the Conservatory School @NPB cafeteria.
Sunday, January 31st through Thursday February 4th is from 9am-9pm in the Village Council Chambers in Village Hall.
Friday, February 5th from 9am to noon in Council Chambers and then Treasure Coast Staff will prepare for a presentation at 6pm in the Conservatory School @NPB Cafeteria.  All meetings are open to the public and anyone who may have a vested interest in the Village of North Palm Beach!  We hope to see you there.

In 1956, the Village of North Palm Beach was incorporated, and we will be celebrating the Village’s 60th Anniversary in 2016.

In 1958, the Village of North Palm Beach was the first Florida town chosen by the National Association of Home Builders as an award winning community for its excellence in planning, zoning, schools, recreation, variety of home styles and public services in place.  In 1973, the University of North Carolina chose North Palm Beach as an example of "one of the few well planned communities of its size in the U.S.A."

This was over 40 years ago when:


A lot has happened since 1956, and in order to ensure sustainability, viability and our unique sense of community in the Village, we need to develop a new Master Plan for the next 60 years. This is why the Village Council has hired the Treasure Coast Regional Planning Council (TCRPC) (Click here for the Agenda Memo/Resolution 2015 - 49/Contract).  TCRPC is doing their research regarding the history and present status of the Village.  In addition, they will reach out to Village leaders, residents and business owners for their views,  On Saturday, January 30, 2016, the first day of a week long charrette process will begin in the Village Council Chambers for all interested residents to give their input regarding the Master Plan for our Village.

I look forward to working with you on this project!

P.S.  Click Below to read my "Letters to Residents" in the Village Newsletter that discuss this process. You may also click on "Stay Notified" on the left hand side of this page to receive updates regarding the Master Plan.